Over two days, I was very excited to be invited by Michael McCarthy (Artistic Director of Music Theatre Wales) to come and observe rehearsals for MTW’s upcoming production of ‘Passion’, a co-production with National Dance Company Wales and created in association with the London Sinfonietta and with EXAUDI performing too! Returning to Cardiff, I was especially interested not only to see more of how MTW works and develops a piece but also how the process for this specific Dusapin opera would be different and unique, especially with the amount of incredible companies involved!

‘Passion’ is specifically described as a dance-opera and that immediately sets it out as a piece for collaboration. Of course, many operas involve and use dance but Dusapin sets out how dance is absolutely essential to this piece in particular. It is a piece that strikes me as one designed for collaborative development and it was this in particular that was strongly felt in the rehearsal room. 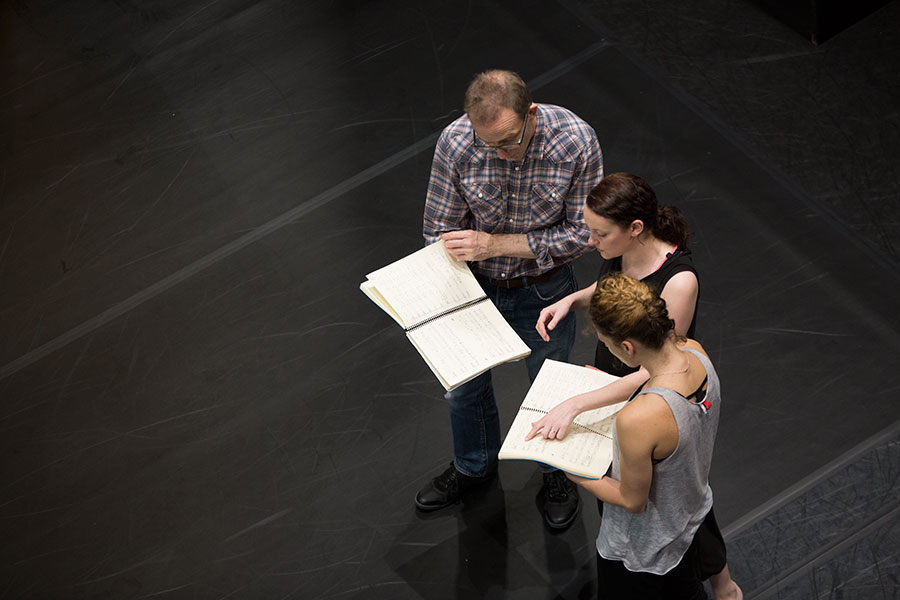 Between Michael and Caroline Finn (co-director and resident choreographer with National Dance Company Wales) there was an ease of working, a shared understanding of a difficult piece and consistent work to explore how the movement and the music work to integrate, to highlight and to respond to one another. In many ways, this was a fantastic opportunity to witness a dance process too and how its constant sense of collaboration and trial and error within the world at hand can enliven and enhance a piece.

This movement becomes especially charged considering the opera’s narrative. While incredibly loose and open to many interpretations, the core is the relationship between Orpheus and Eurydice, or ‘Him’ and ‘Her’ in the score. It is an opera that concerns itself with an intensity of love and emotion, one that might even try to rescue the dead from hell. But, as the story goes, when Orpheus leads Eurydice out of the underworld, he is forbidden from turning back to see her. This movement, this leading on, and especially thinking of when and where they look at one another, has clearly influenced Michael and Caroline in the decisions taken with the piece. 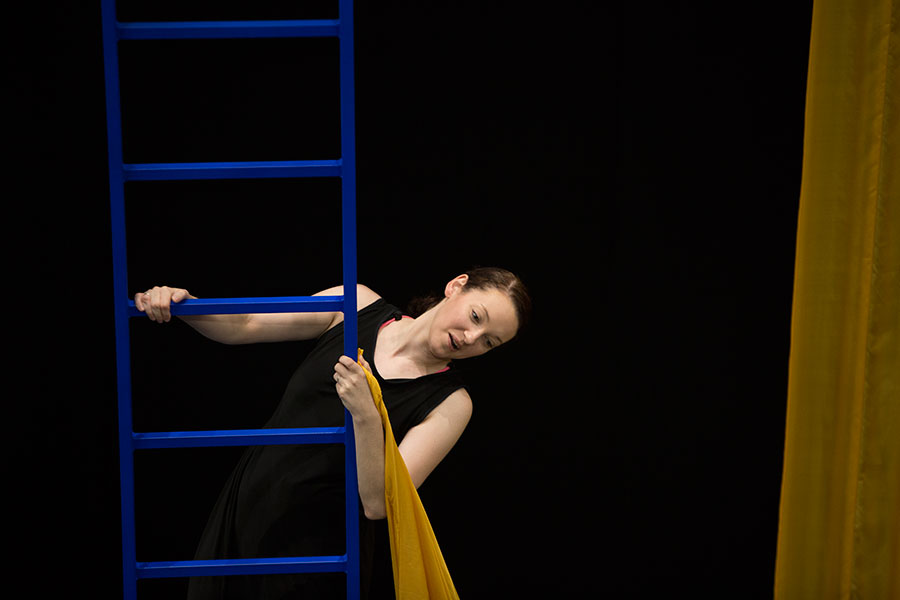 But to focus on that one myth doesn’t do justice to just how non-specific and how strange this opera can be. There’s a constant level of uncertainty about how these two people relate, how they relate to the dancers and how they relate to the (striking and strongly symbolic) set around them. In discussing this with Michael and in seeing an almost full run of the piece, it’s clear that this production wants to amplify that strangeness, to leave significant space open for the audience to be able to step in and respond to. The mystery is essential. 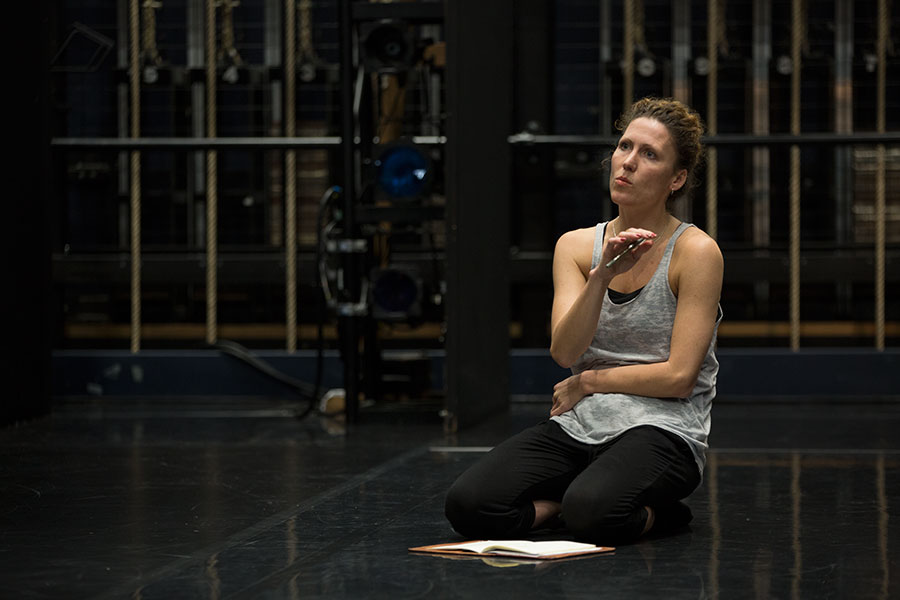 While watching and listening to them rehearse, it’s the moments of stillness that are particularly powerful, both musically and physically. Each one (even at this stage in rehearsal) was held with such an intensity, such a strange and powerful intimacy that I could not look away. In fact, the emotional subtlety, variety and intensity that Johnny Herford and Jennifer France were bringing to their roles was astonishing and incredibly rewarding to see. 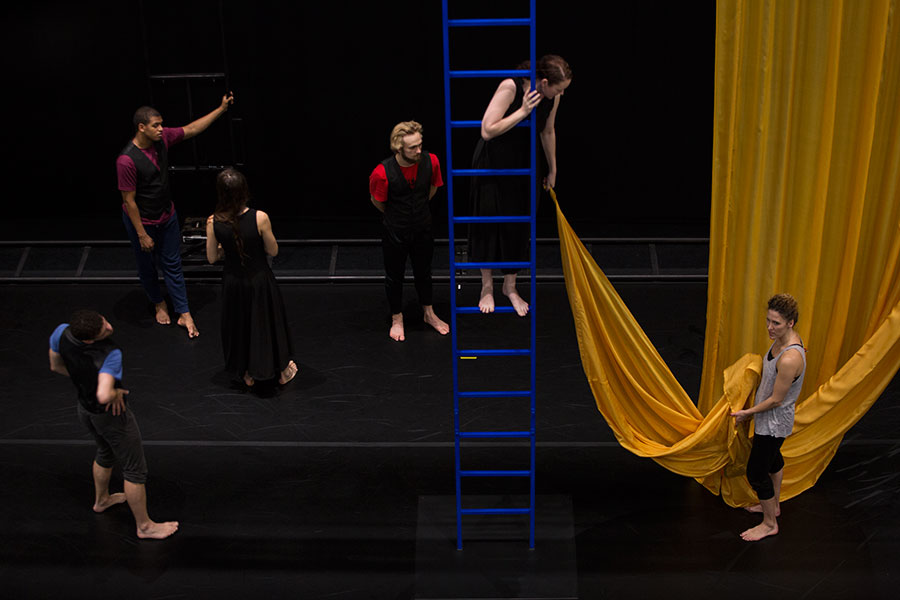 Having been able to see and hear so much in just two days, you would think I saw all there was from this piece in rehearsal but there were more and more elements still to come! From the ending to the continued development of the physical language to the arrival of ‘the others’, voices never on stage but listening, commenting and conversing with the singers at times. The introduction of the ensemble especially, including diverse instruments like harpsichord and oud, will really bring an exciting dynamic shift to everyone on stage I’m sure! 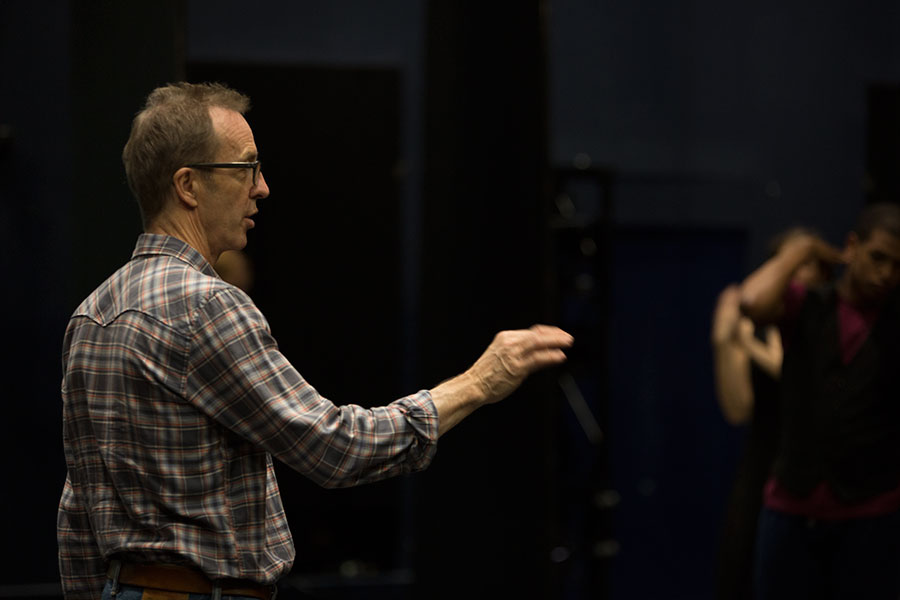 Since observing with MTW last year on ‘Y Twr’, I was really excited to continue working with contemporary opera, and since then have completed an MA at Guildhall as a librettist. I’m incredibly grateful to MTW for helping to give me this push and it was great to have the chance to return and to see that same enthusiasm for the potential of contemporary opera and music. It was also brilliant to see just how strong the commitment to collaboration was on all sides and how much this was clearly enriching the performance at hand. Opera after all always is a collaborative art form, bringing so many elements together at once, and it’s fantastic to see that legacy honoured!

I’m incredibly excited to catch the production when in London (and to still be surprised despite my privileged sneak peak) and urge everyone to see it and engage in the mystery yourself!