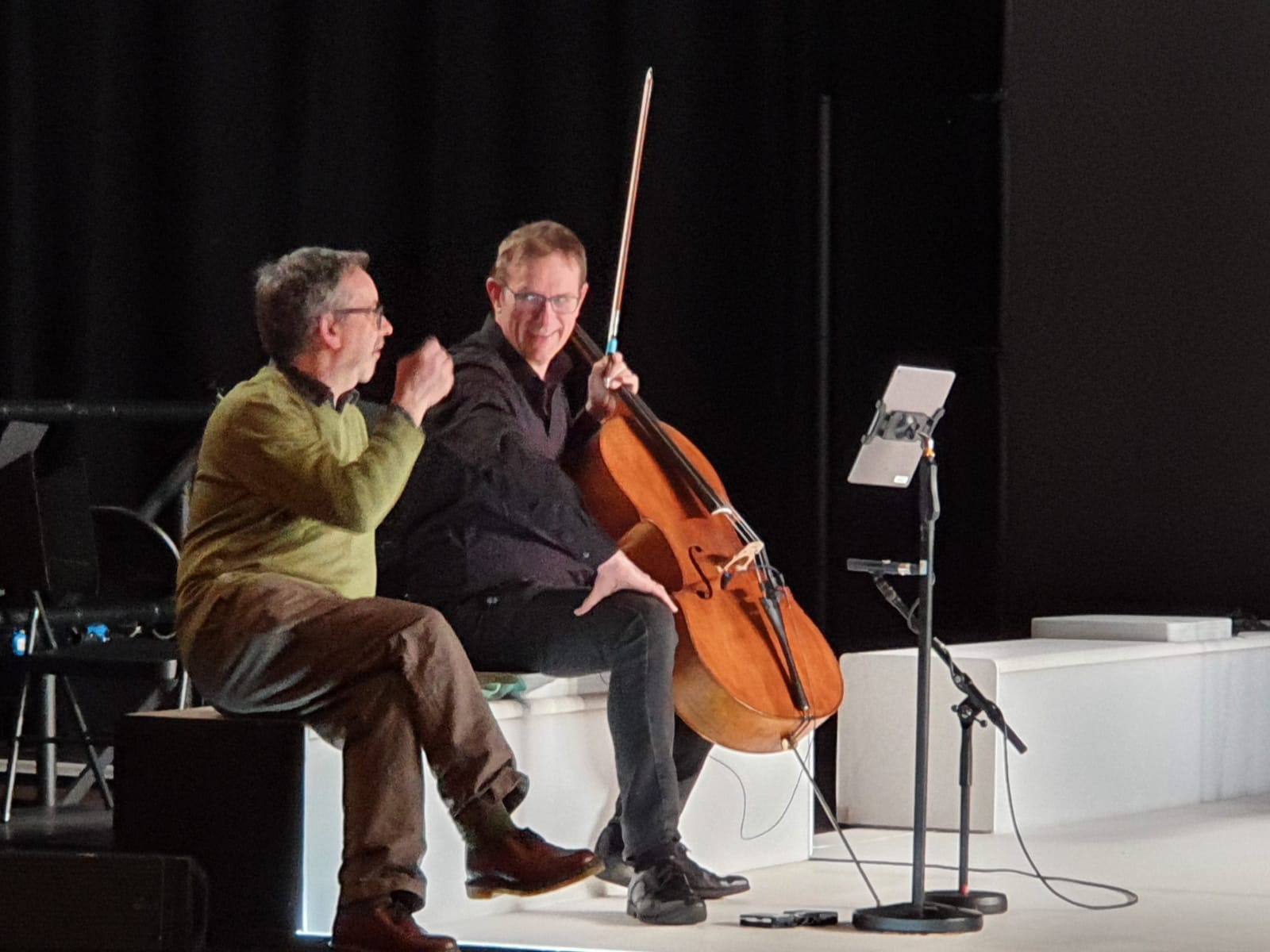 Ace with ‘cellist Tim Gill on the set of Denis & Katya

Just last week, Lighting Designer Ace McCarron, a close colleague and friend, told me of his decision to step back from the extreme demands of working as Music Theatre Wales’s touring lighting designer after a long and amazing association. Typically, Ace referred to his 30-year working relationship with MTW as his apprenticeship, leading towards a new area of artistic development and expression. This comes as no surprise, and I simply want to find a way to say thank you to him for his extraordinary contribution to the company.

Ace has always been interested in much more than the lights of his trade. He has always served the drama and the music, constantly exploring the purpose of lighting choices beyond the way they simply look. In this way, he has continually contributed to the bigger picture. One of the things I’ve always loved about Ace is his deep respect and admiration for the work everyone else does to make a production happen. This is especially true of all the performers, with whom he developed a collaborative approach which is as fundamental to the success of MTW as it is rare to find. The photograph of Ace finding a moment to sit on stage and talk to cellist Tim Gill during yet another madly demanding touring day (Denis & Katya at The Purcell Room, London – our final performance before lockdown) captures this spirit.

We first met in 1984 when I joined The Fires of London – the company founded by Peter Maxwell Davies and which was one of the major models for the creation of Music Theatre Wales. Ace was already their touring lighting technician and I joined as the assistant and revival director. Our first true collaboration was during the staging of Max’s opera The Martyrdom of St Magnus in the St Magnus Cathedral on Orkney. As it turned out, we hit a huge electrical problem and Ace and I found ourselves trying to light the production at break neck speed with minimal equipment and a low-tech lighting board which had lost its memory facility (if I remember correctly). Ace stepped up and devised a way to maintain integrity in the production whilst running the show in a semi-improvised way, and all was well. When it was clear that I needed someone who could manage the rigorous production and touring demands of MTW on only its second production – The Fall of The House of Usher by Philip Glass - there was only one man to turn to, and it has been the same ever since.

Ace has been an exceptional artistic collaborator and a close, supportive friend, and I have no doubt he will continue to be so. He will remain a big part of Music Theatre Wales and I know he will keep asking those questions – of the work he sees and of himself. I very much look forward to seeing the work he goes on to produce now his apprenticeship is complete!

Ace McCarron: Lighting Designer and key member of Music Theatre Wales from 1989 to 202020