It is with great sadness that we have received the news that Sir Peter Maxwell Davies – Max – has died.

Max was the inspiration for Music Theatre Wales. The very first opera that Michael Rafferty and I produced in 1982 at the start of Cardiff New Opera Group was his extraordinary opera The Lighthouse. It blew us away and the Cardiff audience too. 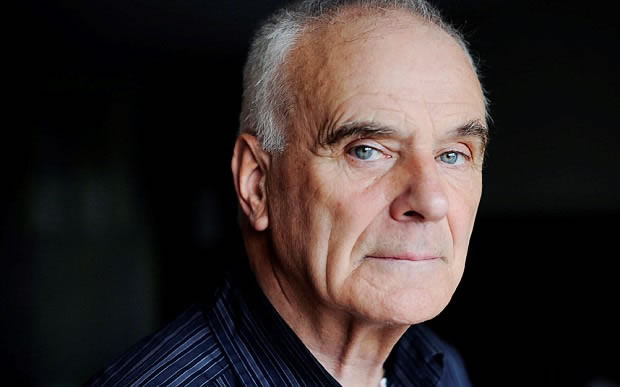 The sensational impact of the piece, the way the music and drama work together and built to that irresistible climax, its perfect scale with just 3 singers and 12 musicians all made it the perfect model for our future company. It remains the perfect model for Music Theatre Wales all these years later, as did Max the composer and Max the man. In fact, Music Theatre Wales began life in 1988 with a production of another of his operas – The Martyrdom of St Magnus. This production ended up with an extended life, touring in Wales and going on to the MaxFest at the South Bank and Glasgow 1990 as well as being released as our first CD. Both works have a seminal place in the company’s history and identity, and life would have been very different indeed without them!

I had also been lucky to work as an assistant and revival director with Max’s own group, The Fires of London. Max wrote both these operas and several music theatre works for the company and in many ways it gave me the best possible insight into the running of this kind of outfit, including staging The Martyrdom in the St Magnus Cathedral in Orkney (a real highlight). Max was ever present, enthusiastic and insightful, sharp witted and seeking only the best. His spirit was infectious and deeply influential. When he finally decided to stop running the company (and spending all his own money on keeping it going) we were on the verge of forming Music Theatre Wales, and typically he donated all the sets, props, costumes and touring equipment, including music stands and many flight cases to MTW, and sold us all the percussion The Fires had assembled over the years – for a knock down price! We are still playing the same timpani, although we did invest in proper flight cases to protect them from the rigours of the road, and only recently sold the marimba to a delighted music teacher who couldn’t believe it still had The Fires of London stickers on it! Max’s influence went far and wide, across all ages and many cultures, and his ideas and impact on smaller scale opera, music education and the musical life of the UK will remain a glorious legacy.

We last met with Max to talk about the possibility of him writing a new opera for Music Theatre Wales. He was clearly delighted at the approach and seriously considered the idea, but deep down I believe he knew it would have been taking a risk for both himself and for us. A couple of years before that he had been due to lead the Public Masterclass of our Make an Aria project in our home town of Cardiff. Sadly this was the day after he was suddenly diagnosed with leukaemia and had been taken straight into hospital. That was a terrible shock, but the way he faced this illness was typical of the man, refusing to bend to its will and despite being at death’s door, completing his final symphony in his hospital bed. We never got him to participate in Make an Aria, but his influence on the project was always there – encouraging and supporting developing composers being one of the most important things he gave himself to. There will be many composers who have much to thank him for.

Finally, I want to go back to his special relationship to our company. When we last toured The Lighthouse he joined us for several performances and pre-performance talks. I remember him turning up in Huddersfield and asking if he could go on stage before the talk. Slightly surprised I took him there and after a moment standing in the middle of Simon Banham’s superb structure, he turned to me and said how he loved our production and how seeing the set gave him the inspiration he needed to give the talk. The last time we worked on a piece by Max it was his revolutionary work Eight Songs for a Mad King in 2013, in celebration of the company’s 25th anniversary and acknowledging his special place in our formation. We have visited this piece on several occasions over the years and its sincerity and humanity has never failed to touch me. It is a quite brilliant and original work.

Max had been our one and only Patron for most of the life of the company. He was always a friendly ear and a willing supporter, but most of all it was his work that inspired the creation of this company and which has been the foundation stone for my entire professional life.

Thank you Max. We will miss you.