Michael McCarthy provides the third and final instalment of his Director’s blog, recounting the travels of Music Theatre Wales’s The Golden Dragon, into the final performances at Tongyeong International Festival of Music…

It’s the opening day of the TIMF Festival and the time has come to share our production with a Korean audience.

Pacing today has been difficult. The performance was at 10pm, immediately after the opening concert (including Beethoven 9 and the “European Anthem”…) so it felt like a free day, but the performers especially had to be careful about energy levels. I chose to have a day alone and started by doing some preparatory work on Y Tŵr. It was slow work so I decided to get out for a coffee and head into town to experience the extraordinary fish market and stimulating sights and sounds.

Eventually the time came to make my way to the Festival’s opening reception, attended by the ex-Korean Prime Minister, three Ambassadors (the British Ambassador arrives tomorrow) and the wife of Isang Yun, the composer from Tongyeong who is the inspiration for the festival. Quite an event. 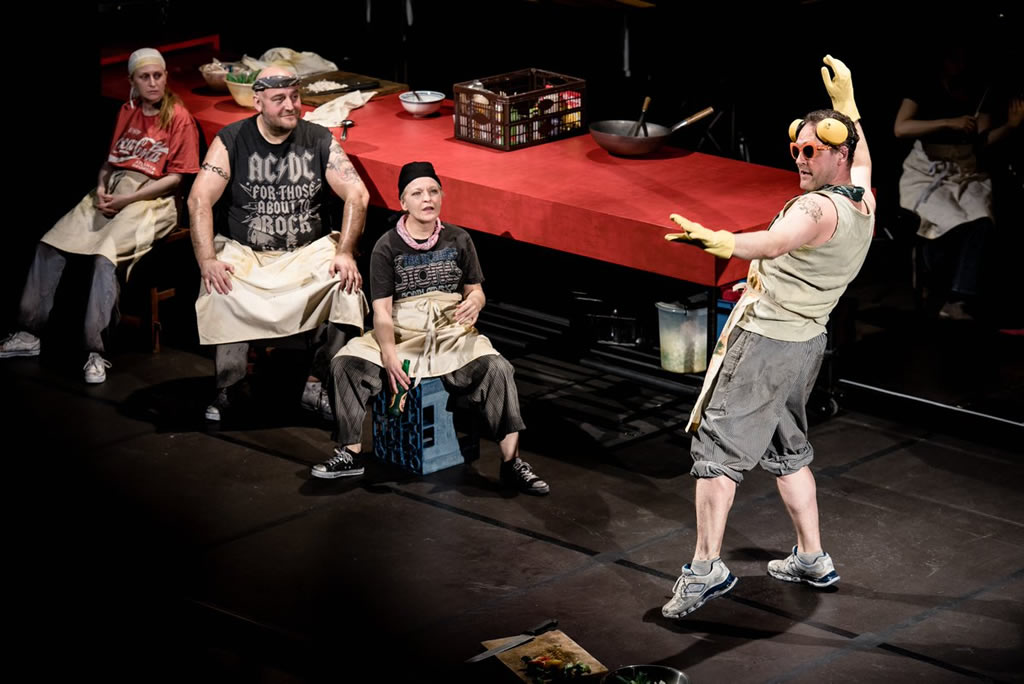 We opened with a highly energised and incredibly focussed performance. Hugely detailed but refreshingly dynamic and live – just how I like it. The audience responded well, laughing at the start and loving the dancing Cricket – especially the little bit of Asian fan dance and Gangnam Style reference we put it – but evidently moved by the end.

Before the curtain went up I had a new experience – signing my autograph up the sleeve of someone’s jacket (their request!), and received some wonderful feedback after the show. One woman came up to me to apologise for not clapping more strongly, because she was so touched by the impact of the story. It turned out she lectures on current trends and issues associated with immigration, so you couldn’t get a more informed reaction. TIMF did us proud after the performance with some wine in the restaurant, but it was late and with two more consecutive shows to do, so there was no late partying.

The day started with an onslaught of noise outside while the local Oyster Festival got under way. It began with some interesting traditional music (greatly amplified on a large outdoor stage) but soon went to endless K-pop. Sadly, this made working on Y Tŵr rather difficult, but I did the best I could (we start rehearsals in one week!). 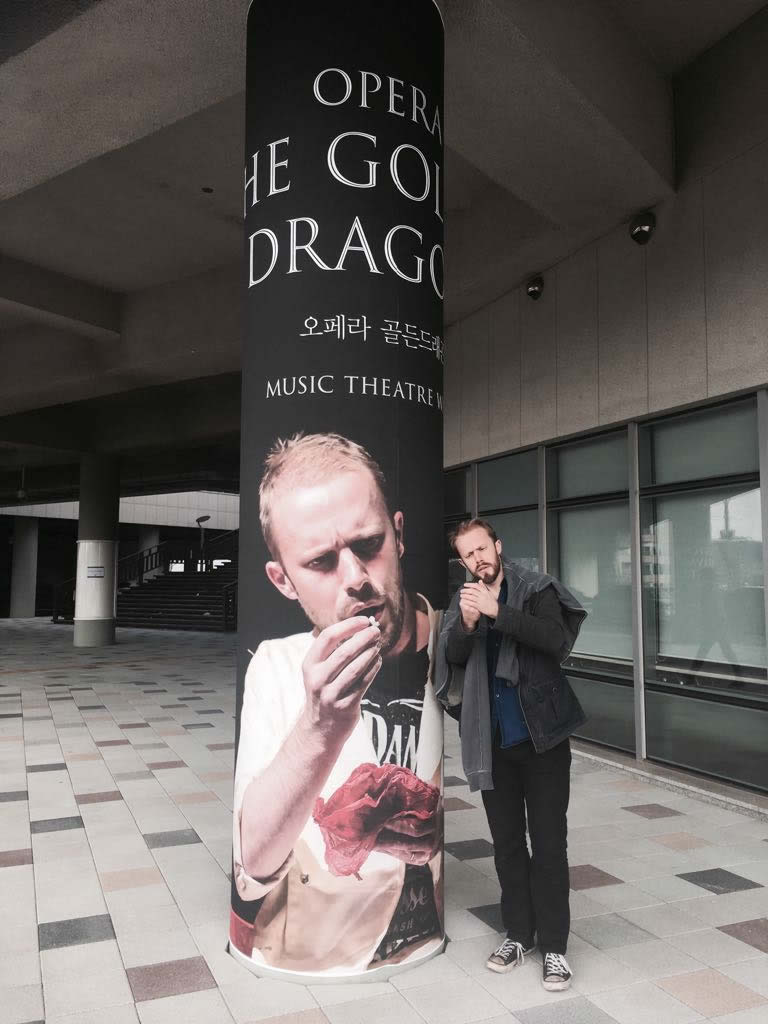 In the afternoon Nicholas Kok and I went to the afternoon chamber concert featuring three works by Isang Yun. The Pièce Concertante from 1976 was fascinating and really well played. This is always one of the joys of performing at a festival, discovering new things and feeling part of a larger organism, and of course bumping into other performers and sharing audiences.

The second performance of The Golden Dragon went down a storm. Lots of laughter at the beginning and a beautiful silence at the end. I was delighted at the response from our British Council colleagues who came for a second time, along with the British Ambassador, who seemed to be genuinely moved by the piece. After the performance, we had a full company reception, and during the short speeches the festival director invited us back!

It really doesn’t get any better than that, knowing our work is touching people, crossing borders and demonstrating that opera really can be a contemporary artform.

I write this having returned to Wales (a 23-hour journey from stepping on the bus in Tongyeong to stepping off the train in Cardiff) and taking a day off. 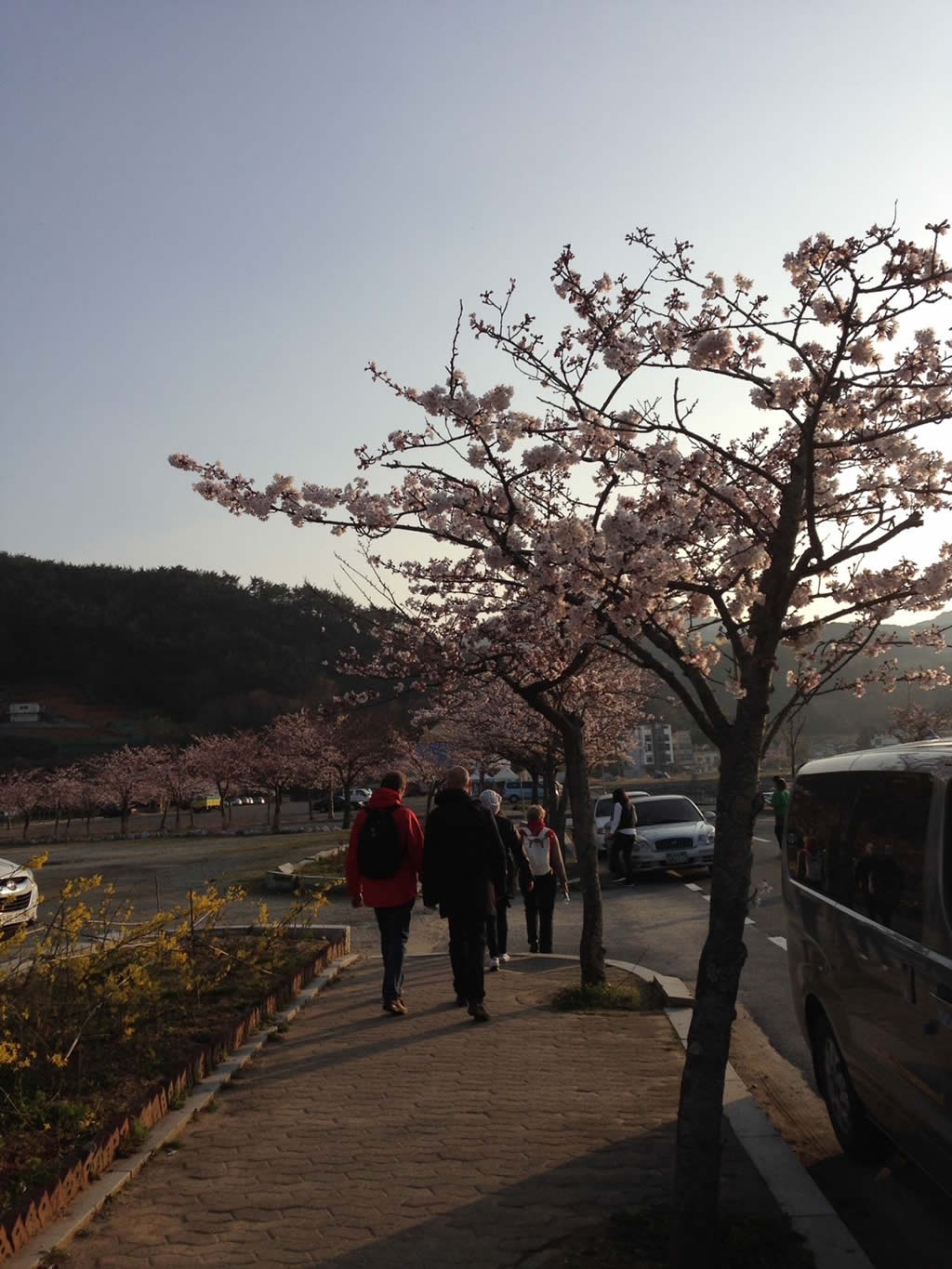 What a fantastic adventure we’ve had! Three fine performances, a good deal of cultural exchange (running the Director’s Workshop and working with the TIMF Ensemble, meeting many wonderful people and eating some fabulous food), and showcasing MTW’s work to another part of the world. Not only have we been invited back to TIMF, but have serious interest from another Asian country in The Golden Dragon. We arrived and departed a very happy company and we remain in awe of the achievement of Peter Eötvös and Roland Schimmelpfennig in creating this wonderful opera. We simply can’t wait to tour it through the UK this autumn

The final performance was the one I was hoping for – dynamic, focussed, funny and moving. One of the directors from my workshop in Seoul came to see it and told me before the performance that he knew the play and didn’t believe that singers could accomplish the degree of acting required. After the performance, he was convinced they could and was deeply grateful for having his eyes opened.

We are deeply grateful to TIMF and the British Council offices in Korea and Cardiff along with Wales Arts International for supporting this visit, but most of all we are simply thrilled to have the opportunity to create this work and share it with audiences far and wide, opening up new possibilities and presenting a new impression of what opera can be.